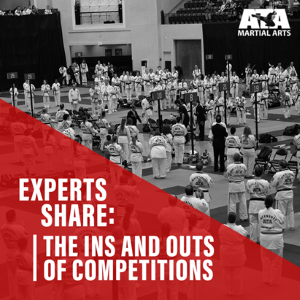 Martial arts competitions may not be for everyone, but it’s something everyone should at least consider! ATA makes tournaments available for students at any experience level from white belt to Master. Each event allows you to perform your skills in new ways, challenge yourself beyond the comforts of your do-jahng walls and even meet some friends along the way.

To put you at ease, ATA staff has met with some of ATA’s professional tournament experts. These instructors and students compete, judge and have even stood on that World Champion podium!  These questions have been asked by students of all ages and ranks, those interested in competition, those who have competed and want to learn more, and parents who aren’t quite sure if competition is their next step. Remember, ATA’s motto is “To compete is to win!” so what do you have to lose?

Q: I’m a white belt and I’m about to test for my orange belt. I feel like I would be the only person [competing] who is a beginner.  Should I try a tournament or wait till I’m higher in rank?

A: Master Jesse Isaacs, 6th Degree Black Belt and owner of Integrity Martial Arts in Cutler Bay, Fla. Has first-hand experience in competing as a white belt.  “My first tournament was as a white belt.  I didn’t win but I did learn that with a lot of perseverance and dedication, I made it all the way to World Champion.”

Both champions agree that taking that first step is important to a martial artist’s journey.  Solwazi, an instructor at Church’s ATA Martial Arts in San Diego, Calif. said, “There will be plenty of other people embarking on the same journey as you.  Building relationships and meeting someone who is also doing martial arts is what tournament are really all about.”

Q: I love doing forms and weapons, but I don’t feel great about sparring. Do I have to compete in everything?

A: Students have a choice to compete or not compete in any particular event, but our team of experts believes you should consider trying each one. Isaacs said, “I want to encourage you to do everything! The more competitions you take part in, the more experience you will receive, which will help you become a well-rounded martial artist.”  Solwazi agrees.  “I believe that sparring is the most honorable portion of martial arts.  Just apply what you learned in forms and sparring will be a breeze!  No better way to gain confidence than to step outside of your comfort zone.”

Q: I just turned 50 and just got my black belt! But I’ve never done a competition and don’t want to compete against kids half my age.  How does that work?

A: “Competition ranks are [typically] divided based on three criteria: age, rank and gender,” said Fairy Degener, 5th Degree Black Belt and two-time World Champion.  “In smaller tournaments, two age groups may be combined to maintain a full ring but it’s nothing you should worry about,” said Degener, owner of Precision Martial Arts in Springdale, Ark.  “Breaking up divisions based on ages and ranks keeps everyone on an even playing field,” Solwazi said.

Q: My ATA Tiger just got his camouflage belt and is eager to compete. I just don’t want him to feel defeated if he forgets his form or loses to the other kids.  How can I prepare him for what he (and I) can expect at tournaments?

A: “At this level, Tigers are not given scores,” Isaacs explained. “They are awarded places like ‘Loudest ki-hap’ or ‘Fastest punches.’ Each competitor will receive a medal or trophy, too, for his or her participation.  As an instructor and judge, we want to make sure each Tiger has fun and feels like they are a champion so that they want to continue competing as they move up in ranks.  We will be there to help each one if they need it and they will leave having had a great time!”

Degener, a regular ATA Tiger judge, says it is her job to encourage, support and cheerlead for all of the competitors.  She also gives advice for students and parents of Tigers.  “The best preparation for your child is to practice and remind them that the judges are there to help,” she said.  “The best tip for you, as a parent, is to make sure you have fun and enjoy the ride.  Someday your child will be in college and the memories you will have of them competing as an ATA Tiger should be amazing!”

Q: I love ATA Tournaments! I usually just compete in traditional events but I’m thinking about trying creative or Xtreme.  What should I do to prepare for that kind of competition?

A: Degener says she uses YouTube for tips and she subscribes to ATA’s YouTube channel. “You will see everything there is to see involving creative and Xtreme!”  She admits she started Xtreme late in her training when she was a 4th Degree but she built on her traditional training. You can also follow some of your favorite athletes on Instagram or other social networks. “Start with building short hand combinations and practice them daily.”  Solwazi said, “Once you’ve created your routine, it’s important to practice.  But keep in mind, when it comes to competition, you’re never wrong because you made up the routine! “ Isaacs said to work with your instructor to put together moves you feel comfortable with and that flow together nicely.  “Make sure your music syncs with your form,” he said.

Q: Combat weapons sparring looks fun. But does it hurt if you get hit?  Can kids compete in combat or is just for adults?

A: “Combat weapons sparring is for everyone! The hits sound like they hurt but we have on all of our pads for protection, plus the combat weapon is made of extremely durable foam,” said Isaacs, who says he loves to compete in combat weapons.  “You will have so much fun that you will totally forget that you are getting hit,” said Solwazi, who calls it “nerf bat fighting.”  “It’s easy and fun and ATA has taken all measures to ensure you and your child’s safety so GO SIGN UP!” he said.

Q: What are some things I should know before my first tournament?

A: First you should know that no matter what your age or rank, any ATA student with the permission on their instructor can compete at any regional or national tournament—even the World Expo! Degener reminds students to “know your forms, one-steps if you are white/orange/yellow belt” and be prepared to have your gear ready.  “Along with all of you sparring gear, make sure you have a mouthpiece for males, have (and wear) your protective cup.”

Solwazi said, “Just remember to make a friend and try your best!”  Tournaments are about building relationships, watching and learning from each experience.  Be proud of yourself no matter what happens because you have gained a great amount of knowledge.  In life, we all need a great story to tell!”

Q: What is your routine the day of competition?

A: “I just listen to music, say affirmations, run through my material in my head and envision myself winning,” Solwazi said. Isaacs makes sure his body has proper nutrients.  “Eat a meal, even if you are too nervous, because there is nothing worse than trying to compete on an empty stomach,” he said.  “Additionally, drink plenty of water.  Sometimes we are too caught up in the day’s excitement and forget that our body needs fuel to perform at its optimum.”

Q: What is different about ATA tournaments than other martial arts tournaments?

A: All of our experts agreed—FAMILY! “I have competed all over the world in open and closed tournaments and I can tell you for certain that we have the best tournaments.  We have fierce competition and push each other to the limit, but when we are done competing, we are still close friends and family,” Isaacs said.  Degener, who has also competed in open and closed events agrees, “We’re all there to support each other.  I have never seen a struggling forms or weapons competitor ridiculed.  Instead, they are cheered on by fellow competitors and spectators who are encouraging perseverance in finishing the routine and to do their best.”

Solwazi wrapped it up by adding, “Everyone is there because they love Taekwondo and they love the ATA!”

Written by Jenny Ross. Originally published in Vol. 22 no. 1 of the ATA World Magazine.