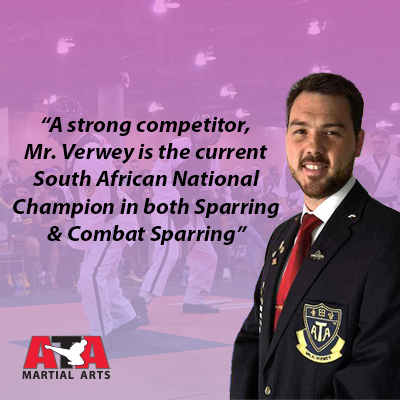 There are big things happening worldwide in the ATA! One of those things is the awarding of 6th Degree Black Belt to Mr. Rohan Verwey of Bloemfontein, South Africa!

Mr. Verwey was born January 6, 1992. He began his journey in the ATA in June of 1998 in Secunda, South Africa under the instruction of Mr. Johann Beukes. He currently trains under the expert instruction of Master Jesse Isaacs, no small feat considering the distance between himself and his Instructor!

A strong competitor, Mr. Verwey participated in his first tournament as a yellow belt at the age of 7 and his first World Championships at age 15 in 2007. He has been the South African National Team Captain from 2015 to 2018. He has placed as high as 2nd in Sparring at the 2018 World’s Tournament Season Kickoff Event. Mr. Verwey is the current South African National Champion in both Sparring and Combat Sparring.

Mr. Verwey had the privilege of sounding the gong at the 2015 Masters’ Ceremony; he looks forward to having the gong sounded for him in the near future.