How To: Improve Your Core Strength

Workout for the Vital Muscles

Want to improve your performance in tournament and testing? Make sure you care for the core.

Aerobic activity and weight training have their benefits, but those benefits can be enhanced and augmented by good core strength.

Popular in mainstream fitness circles among martial artists and elite athletes, core strength training focuses on the muscles of the abdomen, hips, lower back and pelvis.  The benefits include better balance and stability, and such training is tailor made for the demands of Taekwondo.

“The core unifies the upper and lower body together,” said Chief Master Phil Minton of Minton’s ATA Black Belt Leadership Academy in Terre Haute, Ind.  “If you don’t have core strength, you don’t have total alignment.  It helps unification of the body because the legs and the arms are unified by the cored.”

Core strength training is also attractive because it doesn’t necessarily require any special workout facilities or equipment.  A bridge, for example, can be done on your living room floor; it’s not about the fancy surroundings, it’s about proper form.

“I can’t remember a time when I’ve not been doing something with my core in martial arts,” said Master Jesse Isaacs of Integrity Martial Arts in Miami, FL. 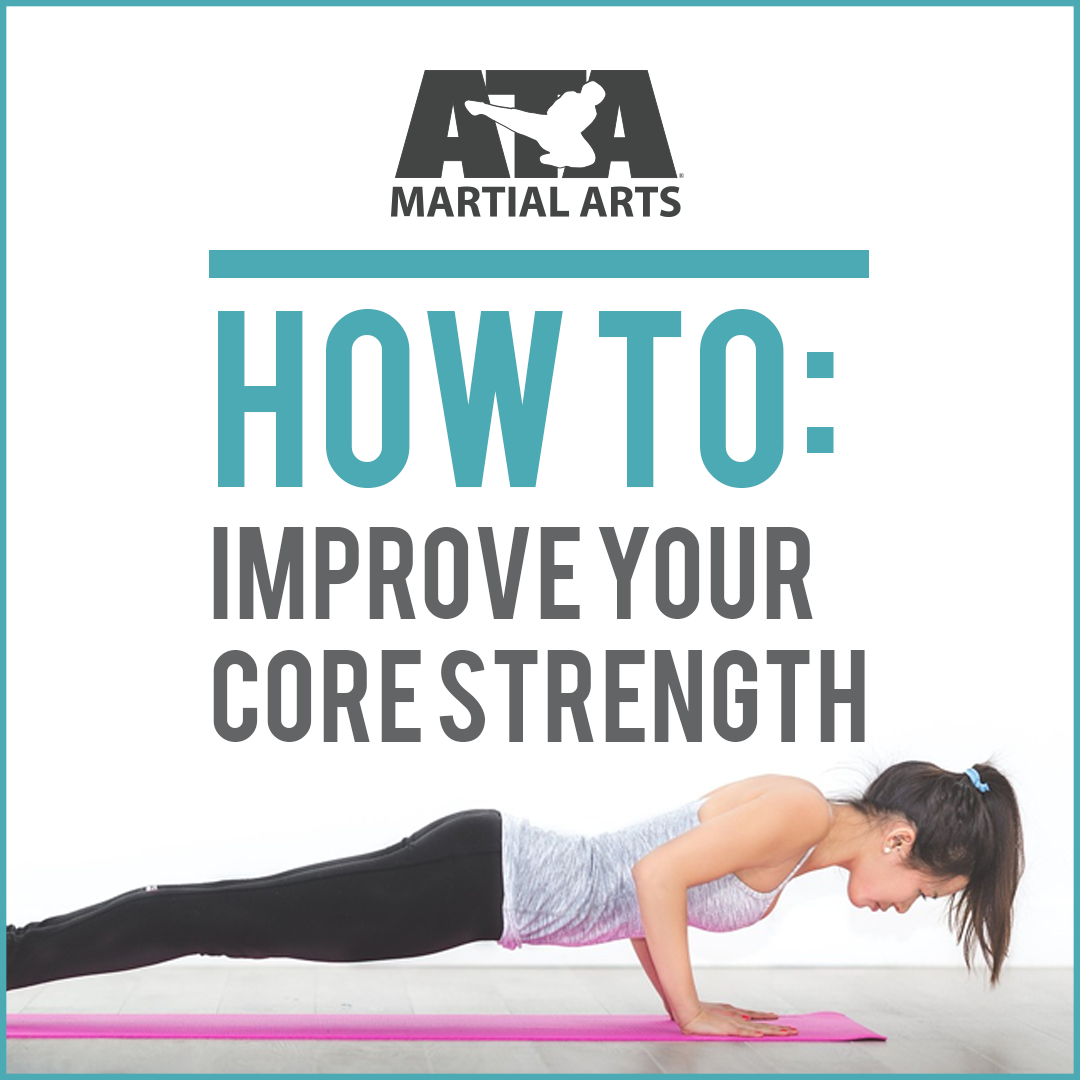 Naturally we all want to look better, and core training, if done properly certainly supplies the toned abs, but it also provides greater strength for all manner of physical activities while weak core muscles, conversely, can lead to poor posture, injuries or lower back pain.

Almost as a consequence of training, most upper level athletes, from martial artists to football players, develop a strong core, Isaacs said.

“I would say martial arts has always relied on a form of core training,” he said.  “You look at any elite level athlete and they’ve got a six pack.  They all are in really great shape- especially a 350-pound linebacker.  You might not see it but they are really strong in their core, their stomach, they’re just extremely strong.”

If you are a goal-setting athlete—and what martial artist isn’t pursuing a higher rank, a different colored belt or a championship? – core training can help by strengthening all the muscles in the torso, front and back, which improves balance and alignment.  And the stretching and balance routines in a core workout can also improve flexibility, which certainly comes in handy when performing a side kick.

“When you have to bring your leg up with a chamber all of the time, our core is what does that, your stomach does that,” Isaacs said.  “It makes a huge difference in how you feel and how you look.”

Minton advocates a series of about five exercises that target the upper and lower tensile abs and both obliques.

The abs work is accomplished by situps or crunches and leg lifts with the legs at different elevations, with the knees drawn up, together and separate.  Doing situps while twisting the trunk and trunk raises while lying on the side target the lateral, or side core muscles. The number of repetitions will increase as you gain strength, Minton said.  “You have to do what you’re used to, “said Minton, who performs around 400 total reps in his workout.  “Start out with five or whatever is comfortable for you. I certainly didn’t start out with that many.”

Isaacs advocates various forms of situps including an inverted situp in which the athlete brings his knees to his chest and then kicks his legs out, and flutter kicks as well as the standard plank (face down, supporting yourself on your forearms while holding a straight posture) and standing planks into which you can incorporate side kicks. He also does pullups, pausing and holding the up portion of the exercise and adding in a front kick while in the position.

“Those are a little more complicated, more advanced, and you have to have a little more strength to do that,” he said.  “But for some athletes that have to be pushed a little harder it’s a great drill,” he said. Exercises vary in type and intensity and are easily found online and, of course, through the advice of your instructor and other fitness experts.

Both Minton and Isaacs recommend coming up with a group of around five exercises that together target the primary core muscles and adding reps as you gain strength.

Isaacs said beginners should start more slowly, with a total number of reps they can handle, though he said 50-100 per exercise is a good number for beginners while intermediate athletes should be doing around 1,200 and elites up to 2,000.

Minton said to rest a day between workouts.

Of course, none the exercises will help you in competition unless you apply yourself to doing them, Isaacs said.

“You have to have that self discipline,” he said. “That what martial arts is all about.”

Written by Chief Master Phil Minton. Originally published in Vol. 22 no. 3 of the ATA World Magazine.

Worlds will take place in Phoenix, AZ
July 11-17, 2022 at the Phoenix Convention Center.