All In The Mind

It’s all in the mind. Literally.

Without mental focus and toughness, it doesn’t matter what weapons you know how to use or what punches or kicks you can perform.  If your mind isn’t a finely tuned instrument, that black belt will no doubt always be out of reach.

Light reading can be okay on weekends and some time spent lying on the beach is fine for that upcoming summer break, but don’t get out of the rhythm of keeping a set schedule so that the mind can stay sharp even greater.

Challenging yourself through learning new things goes hand in hand with moving up in the ranks and learning new forms.  Just like the edge of a sword, the mind needs to be sharpened to perform at its best.

Luckily for Taekwondo students, regular aerobic activity is one of the most important things you can do to promote long-term brain health.  Those of you who are already active through training will find it beneficial, and perhaps easier, to devote yourselves to 30 minutes or so of activity- a run, a bike ride- every other day, which has proven to promote brain fitness.

Exercise plus a balanced diet can protect the brain and prevent mental disorders.  Those who exercise regularly learn faster, remember more, think more clearly and recover from injuries more quickly. 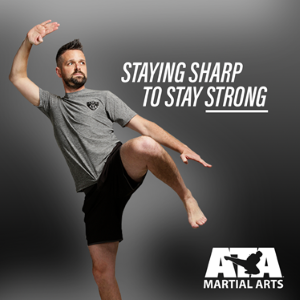 In a review of studies on LiveScience.com, Fernando Gomez-Pinilla, a neurosurgery and physiological science professor at UCLA, talks about the triple-headed benefits of food, exercise and sleep.

“Diet, exercise and sleep have the potential to alter our brain health and mental function,” he said. “This raises the exciting possibility that changes in diet are a viable strategy for enhancing cognitive abilities, protecting the brain from damage and counteracting the effects of aging.”

Avoiding smoking and saturated fat, while also sticking to your exercise, can keep your circulatory system humming, promote brain health and stave off the effects of aging.

While eating properly, consider coffee and fish.  Some studies have shown coffee, or its antioxidants, can slow cognitive decline and decrease incidence of Alzheimer’s, while fatty acids found in fish, flax seeds and grass-fed animals can be beneficial to fighting depression.

But while watching what you eat, you should probably avoid supplements, which may cause harmful side effects like high blood pressure.

And finally, while exercising your body, don’t forget to give your brain a workout, too.  It is hard to say if brainteasers have measurable benefit, but cognitive decline CAN be tied to lack of education.

The brain benefits are most likely the challenge, so try something new rather than attempt the same games over and over.

Written by Todd Traub. Originally published in Vol. 23 no. 1 of the ATA World Magazine.