There are big things happening worldwide in the ATA! One of those things is the awarding of 6th Degree Black Belt to Mr. JP Vorster of Secunda, Province Mpumalanga, South Africa.

Mr. Vorster was born February 10, 1986. He began his journey in the ATA in February of 1996 in Secunda, South Africa under the instruction of Mr. Johann Beukes Jr. at Victory Taekwondo Family Center. He was one of three boys in his family to start training and, in his words, “I guess I just liked it more than they did.”

JP Vorster earned his 1st Degree Black Belt in August of 1998. He earned his Instructor Certification in June of 2007, just before his first World Championships experience. He continued to train with Mr. Johann Beukes Sr., who took over the school in 1996, from 1996– 2015. In 2015 JP Vorster was then granted ownership of the school as Mr. Beukes Sr. retired. Today, JP Vorster is the proud Owner and Chief Instructor of his original school. In 2016 he was proud to begin training his daughter.

As a competitor, Mr. Vorster participated in his first tournament at the age of 10, earning 3rd in both Forms and Sparring. His experience at this tournament ranks as one of the biggest in his career. In his own words, “Just the sheer excitement and insecurity and confidence and fear, all bundled up into one,” made the event one that will stand out in his memory forever. He won his first South African National title in Black Belt Forms division in Ermelo, Mpumalanga in 2005.  He has competed on the South African circuit for many years and have earned multiple national titles in Form, Sparring and Combat weapons. His first World Championships experience was in 2007 where he finished 3rd in Sparring. This event was a major experience in his training career, in it he saw the true size of the ATA, 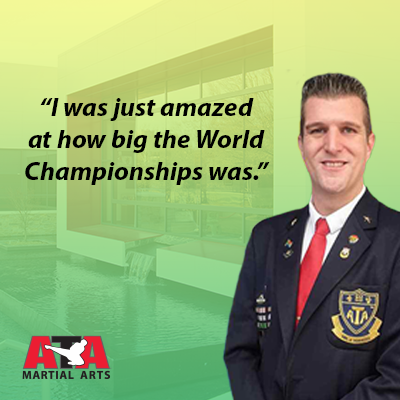 "I was just amazed at how big the world championships was. We are used to having major events in South Africa were there would only be 300 competitors total and you always compete against the same students over and over again throughout the years."

As a School Owner and member of the ATA in South Africa, he has held a number or important positions within the leadership. He is the current Treasurer and Tournament Director of ATA South Africa. His school also serves as the Provincial Offices (Mpumalanga) for ATA South Africa.

In our interview, Mr. Vorster highlighted several major moments in his career that included tournaments. He cited all these moments as “building blocks of our Taekwondo career.” Now he is looking forward to the next major building block in his Taekwondo career, earning the title of Master Instructor.